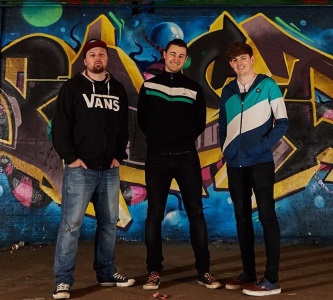 Pop Punk in not a genre normally covered here at Alternative Tracks, but London based Cuecliché have just released a debut five track EP that has caught my attention. Growing up as a punk fan and listening to Cuecliché’s EP One Last Chance, I feIt like a schoolkid just getting into punk again. The band effortlessly blending the super catchy, radio friendly pop punk of now with the speed and aggression of those punk days.

The band formed last year, no little thanks to Gumtree. When bass guitarist and lead vocalist Terry Rytz decided to form a band, he advertised via Gumtree and found guitarist Jake Leigh. It was the perfect match, Terry had the lyrics but no music, Jake had fully produced tracks, but no lyrics. After mixing the lyrics and music they came up with two tracks “One Last Chance” and “10th July”. After sharing the tracks with lyric videos, people wanted to hear the band live. Realising they needed a drummer they turned to Gumtree again, and found Keith Hackett, a drummer who perfectly fitted the bill. His addition to the band pounded the energy levels to a whole new level and led to the releasing of One Last Chance

Kicking it off is A Song For Charlie. Loosely inspired by the Stephen Chbosky ‘coming of age’ novel/film “Perks of being a wallflower”,the band show they are graced with writing meaningful lyrics alongside catchy and melodic punk rock. Jumping out of my speakers and grabbing me by the eardrums the band don’t waste any time in introducing their explosive lock-tight rhythm section. Leigh’s striking sprawl of riffs and hooks ,alongside Hackett’s pounding, punishing beats is the perfect platform for Leigh’s powerhouse vocals and Rytz’s rampant bass. The next track up is 10th July, the date the band began, and it was written “as a promise to each other to always give as much as they can to the band”. Crashing in with heavy guitar riffage, the track features Leigh and frontman Rytz trade off vocals heavily throughout the track ,along side a chorus that’s easy to get stuck in your head. “Been here before, lost our way” is the chorus cry, but the band have a chance if they fight together “been here before but never with a loaded gun” (Cuecliché a metaphor for loaded gun). Catchy choruses ooze out of the EP’s every pore and none more so than on A lost Boy’s Anthem, the most radio-friendly track on the EP. In contrast to the two first two tracks it starts at a relatively slow pace, a little less aggression and bit more vulnerability in the vocals. When the chorus hits, that’s when the party in your ears really starts to pick up. The song picks up speed and the chorus bores its way into the part of the brain that gets you to turn the volume up.The penultimate track Crazy Little Princess is “a song about the girl who walks into any room and grabs everyone’s attention and knows it” It’s another exhilarating song that will snatch your attention in seconds flat. Playing with the enthusiastic energy of people still excited about playing music,the EP closes with the emphatic titled track One Last Chance. Clearly designed to become a big anthem with their fans, it’s a standout track with a massive shout along chorus.

There is a definite cohesiveness to the band’s music, they have their own identifiable unique sound while effortlessly taking bits and pieces from the bands they love and throwing it all down into a hell of a good listen. Getting the balance right between aggression and melody is tricky, but Cuecliché have done it. Sounding huge and alive One Last Chance is packed with compelling music, combusting with vitality and passion. it rarely ever falters. There are only 5 tracks on offer, but every track is memorable in its own way. Cuecliché is a band to watch out for.