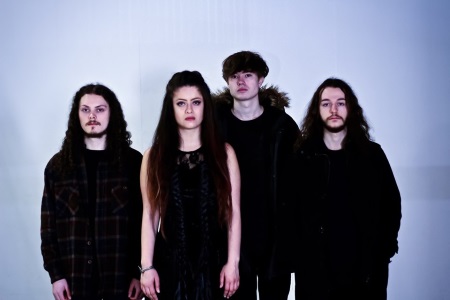 There’s something unique about the sound of Deadwing. They craft dark, mesmerising melodies with emotional lyrics, all wrapped up in a haunting, atmospheric mist. Their debut single ‘May‘ was released on May 31st and it leaves quite a mark.

The band, Ellis Elwyn on lead vocals, Isaac Batty, Guitar, Jack Stanley, Bass, and Jake Lafferty on Drums, are based in Manchester. They only formed at the start of the year and have already pick up a following with their intense live performances.

The new single ‘May‘ is over six minutes long, but this compelling track keeps their audience in the palms of their hands all the way through. All appears calm as Ellis Elwyn’s ethereal vocals take centre stage on the first half of the track. Slowly, the background volume picks up, seeping through like a suspense building soundtrack. Rock guitars and drums begin to take control, only for Ellis’s raw emotive vocals to lift it to greater heights. ‘May‘ is a stunning debut track and well worth a listen. If you live in the Manchester area, catch Deadwing live before they spread their wings.