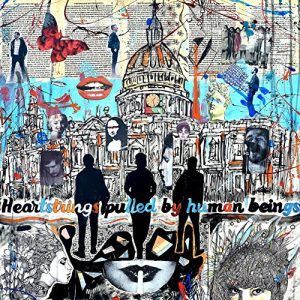 Following the releases of Wir Sind Das Volk and Please Pour Away Those Petrol Eyes  last year (check them out), West Midland based three-piece Divine Youth make another great impression with their new single Heartstrings Pulled by Human Beings. Steeped in classic indie-rock values it showcases the band’s knack for writing songs with an infectious, melodic edge.

The band, consisting of Dan Sheldon on Guitar/Vocals, Mike Sheldon Bass/Vocals and Liam Kaye on Drums, formed in early 2015 “out of a shared love of the hell raiser, the gang mentality, the socialist and the rock and roll animal”.

Opening with an instantly catchy guitar riff and packing one hell of a melodic hook, Heartstrings Pulled by Human Beings propels itself into your subconscious in effortless fashion. The track is driven by Dan Sheldon’s powerful, slightly reverberating, vocals that are delivered full of feeling and seemingly sung from the gut. Divine Youth combine striking riffs with chiming guitar interludes to deliver a track with an incredibly infectious rhythm which is only enhanced by one of those ‘pull you in chorus’ that gets in your head and won’t leave in a hurry.

Catch the band live on March 11th when they support White Lies at Keele Uniiversity.