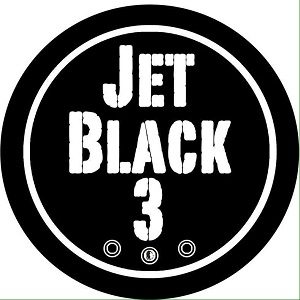 Jet black 3 have just released an EP balancing powerhouse vocals with a layer of meaty, hyper-powered guitar riffs. With rock and roll pumped into their veins, there is a fired up intense energy about this trio from Exeter. The band, Robert Papworth on vocals, guitarist Phil Borrett and drummer Chris Ford, only formed last year, although Robert and Phil have worked together in the past. Unusually, for a heavy rock band there is no bass player, instead Phil uses a guitar through a normal guitar amp and a bass amp to produce a rock-sounding distorted bottom end as well as the classic guitar tone.

Providing a great start to the three track EP is ‘Why on Earth’, a track that kicks off with an acoustic guitar intro before it quickly morphs into a Hard Rock song, with some serious guitar work. ‘Reign‘ opens amidst a mighty flurry of first class riffage while ‘Remember my name’ is a rock anthem in waiting with hooks that won’t quit. With a plethora of memorable riffs and the thunderous, rhythmic drums of Chris Ford providing the perfect wall of sound, the heavy and reverberating lead vocals of Robert Papworth give the band a big sound, deserving bigger arenas and bigger audiences. This EP from Jet Black 3 whets our appetite for future releases, “Remember their name”.