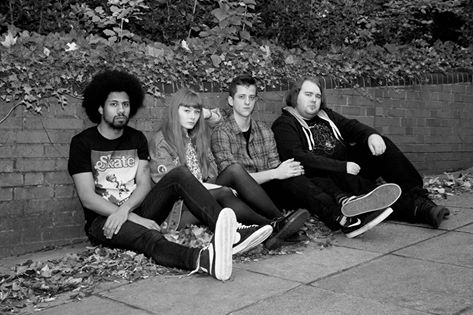 Eased in with a groove that ultimately twists and turns more than anything on radio dare ever do, Ko_Plune‘s debut EP ‘Auditory Atlas‘ is a musical statement of arrival. A piece of proof that exciting, complex and interesting alternative music is still out there and it’s still as good as it’s ever been. It’s a beautifully clashing blend of genres and styles, melding jazz with the song structure and accessibility of pop and progressive rock.

Ko_Plune is a four-piece featuring Courtney Gray on Vocals and Keys, Carl Edwards Guitar, Jack Hill-Jones bass and Guy Anderson on Drums. Ko_Plune began as a solo project with the arrangements being written by Carl, whilst living in Plymouth. Apart from Guy, the band all met whilst studying at Bournemouth University and officially formed as a band in the summer of 2015. From there they continued writing and rehearsing together whilst completing their studies and recording their first single Panda. Shortly after relocating to Southampton to study at Solent University Guy joined to take up the position of being their permanent drummer.
On 18th September ‘Panda‘ was released and 6 days later the band performed at their first gig at The Avondale House in Southampton. Maintaining a strong DIY ethic, engineering and mixing most of the EP themselves, the band have worked hard in the studio and through live performances, to establish their fervently creative vision.

Delivering five gorgeous, contrasting tracks. Auditory Atlas is like a good book that you can’t put down. Putting this on makes you have to listen to the next song, and the next…until you’re out of songs. ‘Rare Error‘ is the opening track and coming in at just under seven minutes it’s also the longest. The track has two halves, the first half it’s all about the vocals of Courtney Gray, fusing the smooth and sultry vocal stylings of jazz with indie haze. The second half sees the band mixing their dizzyingly, jazz-infused licks with some intricate chord changes. ‘Panda‘, the band’s first single, adds a little more indie-pop to the jazz vibe, reminiscent of the early sound of The Cardigans at times, combining Courtney’s confident vocals with an edgy central guitar riff. The sound of rapid, addictive drumbeats accompanies the rockiest of the five tracks ‘Red‘, the guitar licks though, are not rock typical and all the more interesting for it. ‘Hydra‘ is my favourite track on the EP, as the pace slows down Courtney’s vocals are at their compelling best, whilst leaving enough space for the guitars to deliver a delicious fusion of chords. The EP finishes on a high with the infectious ‘Macchiatto‘, which will have you toe-tapping through to the end.
It’s rare that I’m hit this powerfully with new music and as a result, I’m not only a fan but completely sure that great things lie ahead for this band, and this music.
The EP can be purchased via bandcamp