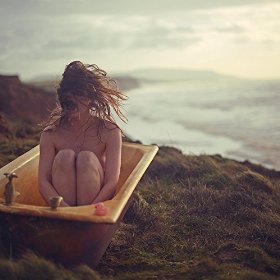 Rhain is a wonderfully talented singer/songwriter based in Bristol and ‘Humdrum Drivel‘ is her debut release. Having already supported the likes of Champs, tUnE-yArDs and Bill Ryder-Jones this a young lady starting to get noticed.
There is an intimacy about this release, midway through ‘Humdrum Drivel‘ Rhain declares “In a world of my own, I’d never have to see another soul,”. The isolation and sparseness she feels is interpreted in the track, through the haunting piano notes and the deliberate, articulate delivery of her unique vocal. In the same way as Elizabeth Frazer from the Cocteau Twins, Rhain uses her voice as a beautiful, mesmerising instrument to capture her audience in the palm of her hand. It’s a stunning introduction and you can hear it below.