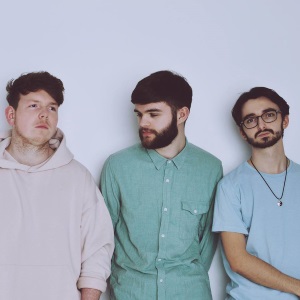 Intelligent, well composed, beautifully layered and balancing something vaguely melancholy with something still uplifting, this slice of shimmering indie-pop from Watercolours is a damn fine listen. With its glistening guitar picks and lush synth waves ‘Feel Tomorrow‘ is the debut release from the three-piece from Cheltenham and at last finds recognition for the talented Conal Kelly.

Alternative Tracks has featured Conal Kelly for a couple of years, with his solo work and last year’s release ‘Undercurrents‘, under the band name Sahara Breeze. Now, with Matt Sharlot and Hamish Woolley, he appears to have found the perfect moniker, Watercolours. With a voice like polished stone and a maturity that belies his age, Kelly has painted a canvass with colourful melodies and smooth instrumental brushstrokes, resonating long after the last note fades. Sweeping you along and leaving you totally mesmerised. ‘Feel Tomorrow‘ is the kind of track that just keeps getting better and better with each listen.

There is an opportunity to catch Watercolours live next month with four dates including two in London and one in Swindon and Bristol. Catch them in intimate surroundings whilst you still can.